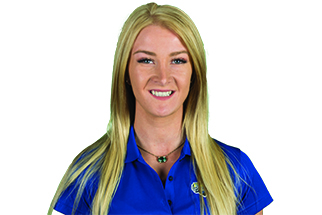 Megan, who first joined the Skeeters in 2016, was born in Chicago and raised in Houston, She graduated from St. Edward's University with a degree in psychology. She loves spending time with her beagle, Reilly, as well as working out, painting, and anything arts-and-crafts related. Her favorite memory with the Skeeters is celebrating the Skeeters' first ever Atlantic League Championship in 2016. Megan is loyal to her Houston sports teams, supporting the Astros, Rockets, and Texans and also has love for the Chicago Cubs.