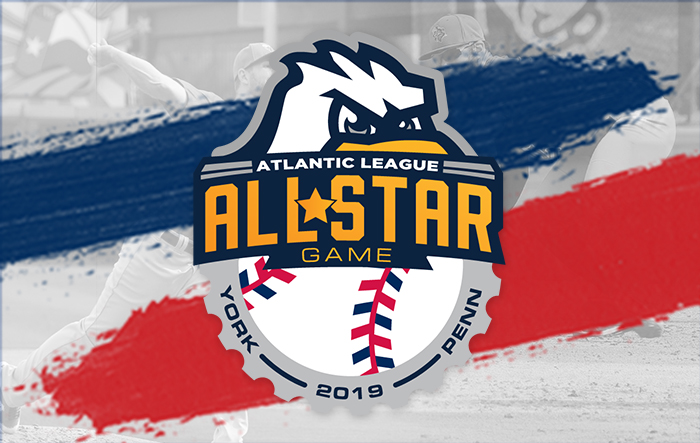 (July 5, 2019, York, Pa.) — The Atlantic League of Professional Baseball (ALPB) today announced the rosters for the 2019 Atlantic League All-Star Game, which will be held next Wednesday at PeoplesBank Park, home of the York Revolution. The 22nd annual ALPB Mid-Summer Classic will feature Freedom and Liberty Division players selected by fans and team officials in a matchup beginning at 7:30 p.m.

“Our fans again stepped up and championed their favorite players to create two great rosters,” said Atlantic League President Rick White. “We want to thank the thousands of fans who voted and the team officials who helped us shape another terrific All-Star Game, and we congratulate the players selected. It’s going to be a great event.”

The 2019 All-Star Game will begin on the Brooks Robinson Plaza at 4 p.m. with the free family entertainment in the Judgement Free Fun Zone presented by Planet Fitness. The All-Star Home Run Derby will kick off at 5:45 p.m., the All-Star Game’s first pitch will be at 7:30 p.m., and the fan-favorite ZOOperstars! will perform between innings. After the game, AAA Southern Pennsylvania will present the largest fireworks display in ballpark history.

New to this year’s All-Star Game, fans of all eight teams may bid on the All-Star Game jerseys of their favorite players from the comfort of their smartphones. Proceeds of the auction will benefit CommunityAid, a non-profit organization that operates thrift stores throughout Central Pennsylvania and raises funds for distribution to local schools, churches, synagogues, temples, and nonprofit charitable organizations. The auction is now open and will close at 9 p.m. on July 10. Fans who wish to bid should find the Live Source app in their Google Play or Apple stores.

Tickets and details regarding the game are available at www.allstargameyork.com.

Here are the complete rosters of this year’s Atlantic League All-Star teams: