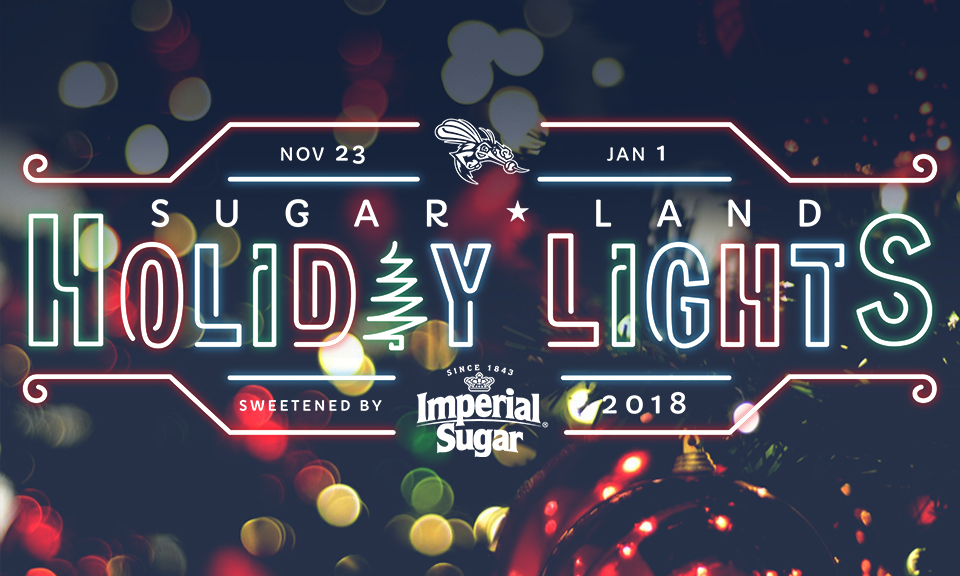 SUGAR LAND, TX— The Sugar Land Skeeters today announced that tickets for the fifth-annual Sugar Land Holiday Lights, sweetened by Imperial Sugar, have officially gone on sale.
Tickets to Sugar Land Holiday lights can be purchased by visiting SugarLandHolidayLights.com, the TDECU Ticket Office at Constellation Field or calling us at (281) 240-4887.
Sugar Land Holiday Lights will feature a spectacle of 2.5 million lights, making it one of the largest holiday light displays in the Greater Houston area. The festival will run from Nov 23-Jan. 1, with Opening Night festivities kicking off at 6 p.m. on Nov. 23.

General admission tickets to the fifth-annual Sugar Land Holiday lights will be $14, with numerous ticket specials available throughout the 38-day event. Companies will also have the option to hold fundraisers for certain nights, with a percentage of ticket proceeds directed back to the company through promo codes available online and the TDECU Ticket Office.
There will be many thrilling and action-packed additions to this year’s SLHL.
Rides and attractions for attendees of all ages will be available at a carnival located in the back parking lot of Constellation Field, along with traditional carnival food and beverage options. Wristbands, giving unlimited access to the rides and attractions at the carnival, will be priced at $10 and can be purchased at SugarLandHolidayLights.com or the TDECU Ticket Office.
While on the way to the carnival in the back parking lot, attendees will have the opportunity to do some holiday shopping thanks to vendors lining the Holiday Walk — located on the Constellation Field concourse.
This year’s SLHL will also feature animated displays throughout the infield, including a state-of-the-art 40’ animated tree, which will debut on Opening Night.
Attendees will have the chance to weave through the array of lights at Constellation Field with the addition of a light maze. Admission to the maze will be included with a general admission ticket to SLHL.
With new attractions to this year’s SLHL, there will also be a number of new theme nights.
Couples attending on Nov. 30 will have the chance to take part in a Murder Mystery Dinner in the Insperity Club while also enjoying numerous couple-incentive discounts throughout the ballpark that night.
Grab your pup and bring them to the ballpark on Dec. 7 as part of our Lights and Leashes Night. There will be certified dog trainers on site and people who bring their dog to Constellation Field will receive $10 general admission tickets.
We’ll look to make some history on Dec. 22 in an attempt to break the Guinness World Record for most elves in one location. More than 1,800 elves are needed to break the record, so come dressed up and be a part of a historical night.
Returning once again to SLHL will be the attendance of Santa Claus, who’ll be available for visits and pictures every night from Nov. 23-Dec. 23. Also returning will be the prodigious, light-studded Texas flag.
For more information on new and returning attractions, as well as information on all theme nights at the fifth-annual SLHL, visit SugarLandHolidayLights.com or call us at (281) 240-4487.
Visit SugarLandSkeeters.com and follow us on Facebook, Instagram and Twitter (@SL_Skeeters) for all the latest news on the team and the latest on events to be hosted at Constellation Field.