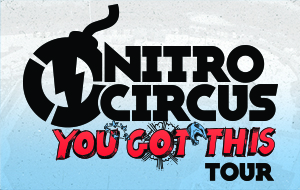 Nitro Circus, a global leader in action sports entertainment, will be performing its famed You Got This show on May 4 at Constellation Field. It will be Nitro Circus’ only 2019 stop in Texas for the You Got This tour.

In 2018 Nitro Circus launched its all new You Got This show, performing in some of the world’s most famous arenas and wowed crowds all across the globe. Now the crew is ready to take 2019 by storm by bringing the adrenaline charged You Got This to outdoor venues across the United States, including Constellation Field, for the first time.

You Got This is the show you cannot miss. Tickets are available now at sugarlandskeeters.com, or can be purchased by calling the TDECU Ticket Office at 281-240-448 or by visiting the ticket office at Constellation Field.

“Live and in person, Nitro is like seeing a UFO. You can never fully appreciate it until you see it live,” said entrepreneur and professional skateboarder Rob Dyrdek.

“Nitro is finding where it’s not possible to go… and then going there,” said actor Channing Tatum.

With no roof there are no limits. This huge stage set features the Giganta ramp, now with its biggest takeoff yet, that launches riders five stories into the air while the FMX riders will be flying 75 feet through the air from take-off to landing. The contraptions team is in the lab cooking up crazy new monstrosities for Nitro’s daredevils to attempt to jump through the air.

VIP TICKETS: Fans can experience the action like never before with the all-new Nitro VIP Club. In addition to premiere seats, VIP club pass holders now get to go behind the scenes with a pre-show track walk, plus have the opportunity to meet some of the riders during an autograph signing, receive a souvenir poster and a chance to win cool swag.