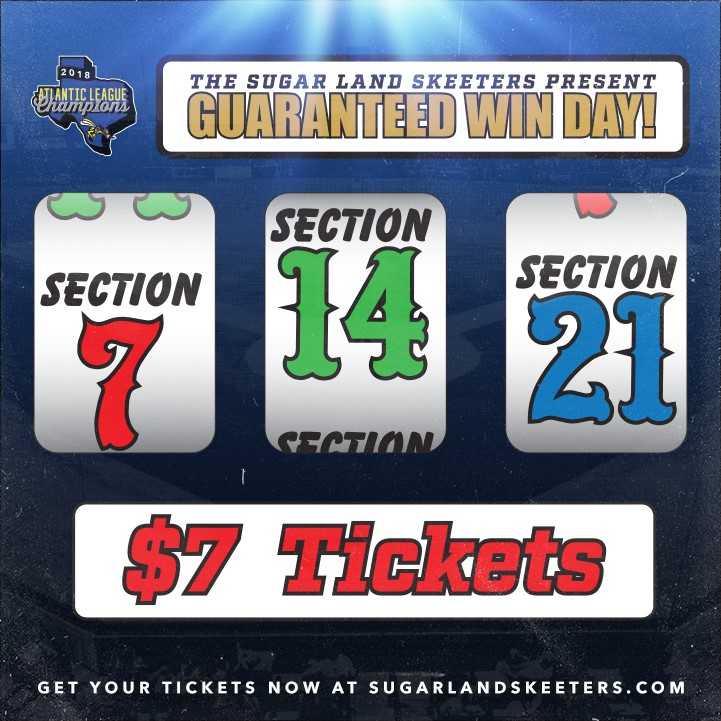 SUGAR LAND, TX - The Sugar Land Skeeters have announced a “Guaranteed Win” promotion for their game on Friday night at Constellation Field against the High Point Rockers.

If the Skeeters do not win Friday night, all fans in attendance will receive a free voucher to attend a future Skeeters game.

“In light of the recent losing streak, we are going to break out all the stops to end it,” said Skeeters President Christopher Hill. “It’s a win-win situation for our fans because if we lose, they get a free Skeeters ticket for a later date. And when we win, we inch closer to a first-half title and a playoff spot.”

Along with the potential giveaway of a free Skeeters ticket, the team will host several other “good-luck” promotions in the hopes of ending the losing streak.

Fans can purchase $7 field-box tickets to sit in Sections 7, 14 and 21 at Constellation Field. The Skeeters will also be pushing back Friday’s first pitch to 7:07 p.m. from its original scheduled time of 7:05 p.m.

The Skeeters play at Constellation Field, a state-of-the-art stadium located at the intersection of State Highway 6 and U.S. Highway 90A in Sugar Land. The Skeeters are a member of the Atlantic League of Professional Baseball (ALPB) and play 140 regular season games.  The Skeeters Baseball Foundation promotes youth education and healthy activities lifestyles by providing support to culturally, racially and economically diverse areas of the community.  For more information please call 281-240-4487 or visit sugarlandskeeters.com.

With eight teams in Texas and the Mid-Atlantic, the ALPB is a leader in baseball innovation and a player gateway to Major League Baseball. Through its exclusive partnership with MLB, the Atlantic League tests Major League Baseball rules and equipment initiatives. The Atlantic League has sent over 900 players to MLB organizations while drawing more than 40 million fans to its affordable, family-friendly ballparks throughout its 22-year history. For more information, please visit www.AtlanticLeague.com.