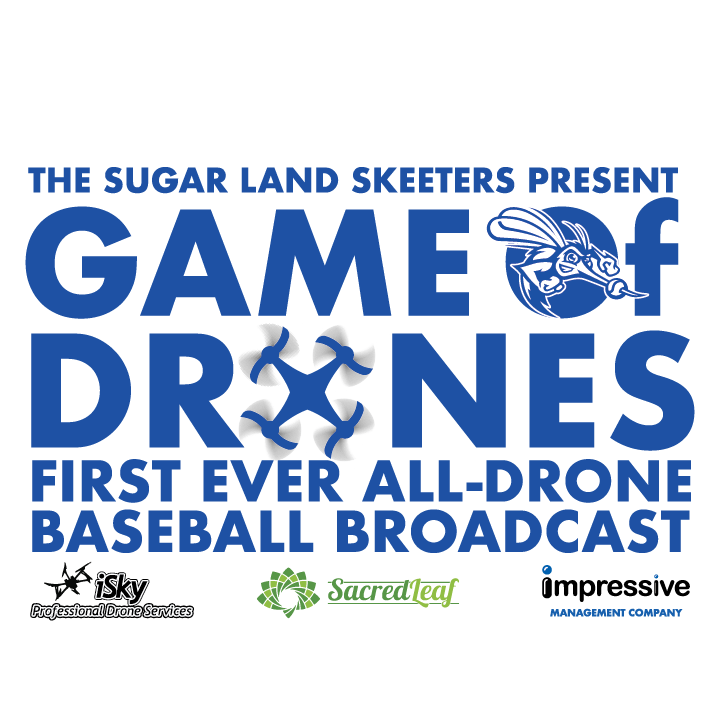 SUGAR LAND, TX - The Sugar Land Skeeters today announced that they will be using footage captured strictly by drones for the broadcast of their regular-season finale on Sept. 22 at Constellation Field, becoming the first pro sports team to attempt the feat.

The “Game of Drones” will be presented by Impressive Management and Sacred Leaf of Texas. First pitch for the contest against the Southern Maryland Blue Crabs will beat 2:05 p.m. and the game will be broadcasted live on the Skeeters official YouTube channel. Three drones will be flying around Constellation Field concurrently to capture the game footage from various angles.

“To be the first pro sports team to our knowledge that’ll be able to use this revolutionary drone technology for an entire broadcast is pretty special,” said Skeeters President Christopher Hill. “We’ll be able to showcase beautiful Constellation Field and the surrounding Sugar Land community in ways that we’ve never done before.”

The Skeeters have named iSky Drone Services as their official drone provider for the “Game of Drones.” With over 29 years of experience, iSky will be providing the three drones and FAA-certified pilots to provide the unique perspectives of award-winning Constellation Field.

“iSky is excited to be the official drone partner of the Sugar Land Skeeters,” said Russell Kutach, president of iSky Drone Services. “We are looking forward to being a part of this historic broadcast that will utilize only drones during the game to deliver a first-time experience for the fans.”

The Skeeters will intermittently play the drone broadcast footage on their Texas-sized scoreboard in center field throughout the contest to give fans in attendance views of the drone footage that will be on the broadcast. Fans can purchase tickets by visiting sugarlandskeeters.com/tickets, by visiting the TDECU Ticket Office at Constellation Field or by calling the Skeeters at (281) 240-HITS.

The Skeeters and iSky will be using DJI Inspire 2 drones, which specializes in aerial cinematography. There will be iSky pilots set up on the roof of Constellation Field, piloting the three drones that will be capturing the footage. The drones will not be hovering over fair territory or fans in the field-box sections at Constellation Field at any point during the game.

The Skeeters have clinched a 2019 postseason berth and have chosen “Come and Take It” as their postseason theme, in honor of the Battle of Gonzales in 1836. Playoff tickets are currently on sale and fans can visit sugarlandskeeters.com/playoffs for more information on playoff dates and ticket packages.