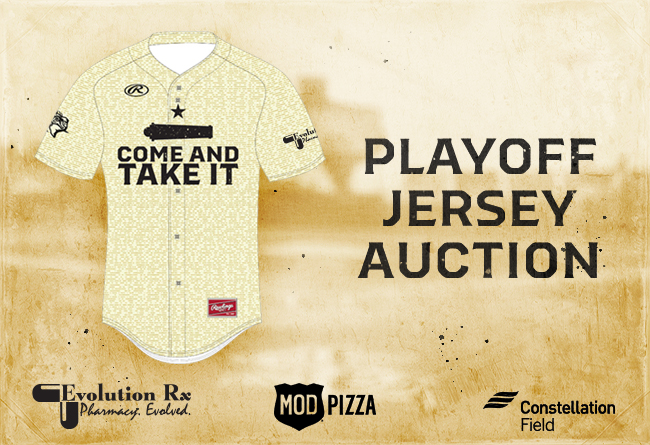 SUGAR LAND, TX - Due to a high volume of interest, the Sugar Land Skeeters today announced they are currently auctioning off their special-edition “Come and Take It” postseason uniforms through Live Source.

Fans can bid on the soon-to-be game-worn Skeeters postseason jerseys by downloading the Live Source app on the IOS App Store or Google Play. After downloading the Live Source app, fans must make a free account with a user-name and password and then search “Sugar Land Skeeters” to find the special-edition “Come and Take It” uniforms. The bidding ends at 12 p.m. on Oct. 11 and all bids start at $100.

Along with the game-worn “Come and Take It” postseason uniforms, there will be several other game-worn Skeeters jerseys from throughout the 2019 season up for auction.

The Skeeters chose the “Come and Take It” theme as a tribute to the 1835 Battle of Gonzales, which was the first military engagement of the Texas Revolution.  As part of the “Come and Take It” theme, the Skeeters will have a replica cannon on site that will be shot off before each game, as well as Battle of Gonzales reenactors available for photos and meet-and-greets throughout the game.

There will be several ticketing and promotional specials based off significant dates from the Battle of Gonzales. Each playoff game at Constellation Field will begin at 6:35 p.m. as a tribute to the year 1835 when the Battle of Gonzales occurred. Fans can also purchase all-you-can-eat tickets for the HEB Picnic Plaza for $18.35.

If the Skeeters advance to the Atlantic League Championship Series, they would host Game 3, along with Games 4 and 5, if necessary, which would occur from Oct. 4-6.  Packages that include tickets for all potential playoff games are available for purchase at sugarlandskeeters.com/playoffs.

All Skeeters home games can be streamed live on the Skeeters official YouTube channel  or can be listened to live by visiting sugarlandskeeters.com