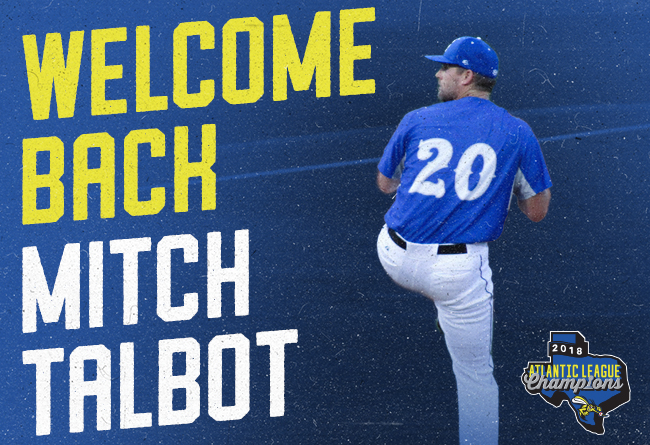 The Cedar City, Utah native made his Skeeters debut in 2017 and went 9-3 with a 3.30 ERA in 21 games. His ERA was the second-lowest of Skeeters pitchers with at least 100 innings pitched that season.

The Houston Astros drafted Talbot in the 2002 MLB Draft out of Canyon View High School (Cedar City, Utah). Talbot pitched four seasons in the Astros farm system before being traded to the Tampa Bay Rays, with three-time MLB All-Star Ben Zobrist, in July 2006. He was then traded to the Cleveland Indians in December 2009.

Along with the Astros, Rays and Indians, Talbot has also pitched at the affiliated level with the Miami Marlins and New York Mets. He’s pitched at the professional level with the Hanwha Eagles and Samsung Lions of the Korea Baseball Organization as well. Talbot first joined the Atlantic League in 2014 with the Long Island Ducks.

The Skeeters, winners of the 2018 Atlantic League Championship, open the 2019 season  April 25 at Constellation Field against the Southern Maryland Blue Crabs. Season tickets and mini plans for the 2019 season are currently available and individual tickets will soon be made available. To purchase season tickets or mini plans, or for more information on ticketing, please visit sugarlandskeeters.com or call the TDECU Ticket Office at 281-240-4487.