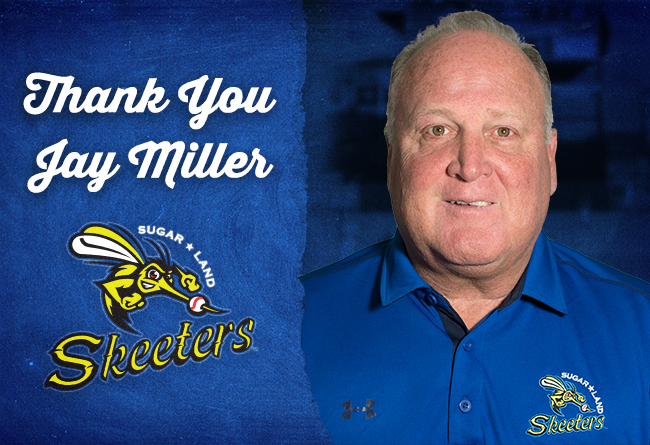 “I cherished my time in Sugar Land, from the fans, the staff, the team and all of our partners, and I truly believe I’m leaving the organization in a better place,” Miller said. “I have the utmost confidence that the front-office staff will continue to develop the Skeeters brand while continuing to run a first-class organization. The Zlotniks have become great friends to me and I appreciate them so much. This has been a highlight of my 38-year baseball career.”

“It cannot be understated the impact Jay Miller has had over the past three years, not only within the Skeeters organization, but within the entire surrounding community as well,” Stamm said. “On a personal level, Jay has been one of the best mentors I could have ever had. He has been absolutely critical in boosting overall fan experience at Constellation Field and has created opportunities for our organization that were not thought to be possible before his arrival. While Jay will be greatly missed in Sugar Land, the Skeeters organization will continue to provide the best source of fun, affordable, family-friendly entertainment in the Greater Houston area. We are excited to start the 2019 season, as we look to bring home back-to-back Atlantic League Championships.”

Miller joined the Skeeters in December 2015, bringing with him 35 years of experience as a professional baseball executive, following stints with the Texas Rangers, Round Rock Express, New Orleans Zephyrs and several other Minor League organizations.

Miller helped increase the team’s overall attendance in each of his three years. The Skeeters’ attendance of 8,606 on July 4, 2016, still serves as the Atlantic League’s all-time single-game record.

Stamm has been with the Skeeters organization since their inaugural season in 2012. After five seasons as a Senior Sales Manager, he was promoted to Assistant General Manager in 2017. He has been recognized several times as a top salesperson within the organization while also serving integral roles in gameday operations, fan experience and community relations.

“It’s been a tremendous three years for the Skeeters organization and we appreciate all of Jay’s contributions and wish him the best in the future. Jay is a friend to all and will be missed.” said Skeeters Owner Bob Zlotnik. “We are excited about the leadership Tyler has exhibited for seven years and we look forward to continued success of the Skeeters organization.”

The Skeeters play at Constellation Field, a state-of-the-art stadium located at the intersection of State Highway 6 and U.S. Highway 90A in Sugar Land. The Skeeters are a member of the Atlantic League of Professional Baseball (ALPB) and play 140 regular season games.  The Skeeters Baseball Foundation promotes youth education and healthy activities lifestyles by providing support to culturally, racially and economically diverse areas of the community. Constellation Field also serves as a premiere event destination for the Greater Houston Area, hosting company parties, the Southland Conference Baseball Tournament, Sugar Land Holiday Lights and much more.  For more information please call 281-240-4487 or visit sugarlandskeeters.com.

The Atlantic League has been a leader in professional baseball and a gateway to Major League Baseball since 1998. Over 40 million fans have attended Atlantic League games and more than 900 players and 70 managers and coaches have joined MLB organizations directly from the ALPB.  The Atlantic League emphasizes winning baseball games, showcasing the talent of top-caliber players and offering affordable family entertainment. For more information, please visit www.AtlanticLeague.com.