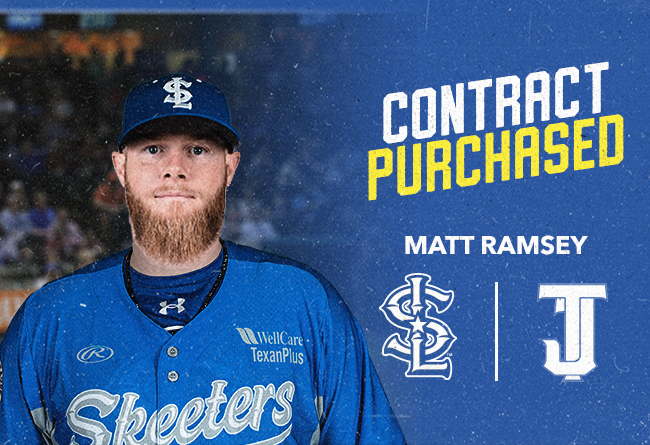 SUGAR LAND, TX – The Sugar Land Skeeters today announced that the contract of right-hander Matt Ramsey was purchased by the Tijuana Toros of the Mexican League.

Ramsey is the 14th player to have his contract purchased by an outside professional baseball organization this season, which leads the Atlantic League and matches the Skeeters franchise record set in 2018. The Skeeters have had 11 contracts purchased by Major League Baseball organizations this year, which also leads the Atlantic League and is one away from matching the franchise record, also set in 2018.

The Skeeters lead all independent league baseball clubs with 23 contracts purchased by MLB teams over the last two seasons. The next closest team is the Kansas City T-Bones of the American Association with 16 contracts purchased.

Ramsey, 29, made four appearances with the Skeeters, going 0-0 with a 4.50 ERA and collecting a save, also striking out seven batters in four innings of work. He made his Major League debut with the Los Angeles Angels in 2019, throwing a scoreless inning of relief on April 25 against the New York Yankees. He was one of two players on the 2019 Skeeters who had appeared in the Majors this season, joining right-hander Nick Rumbelow (Seattle Mariners).

The Tampa Bay Rays selected Ramsey in the 19th round of the 2011 MLB Draft out of the University of Tennessee. He’s appeared at the affiliated level with the Miami Marlins, Milwaukee Brewers and Houston Astros, as well as the Rays and Angels. Through his seven-year pro career, he’s gone 13-15 with a 2.86 ERA and 55 saves, along with averaging 10.6 strikeouts-per-nine-innings.