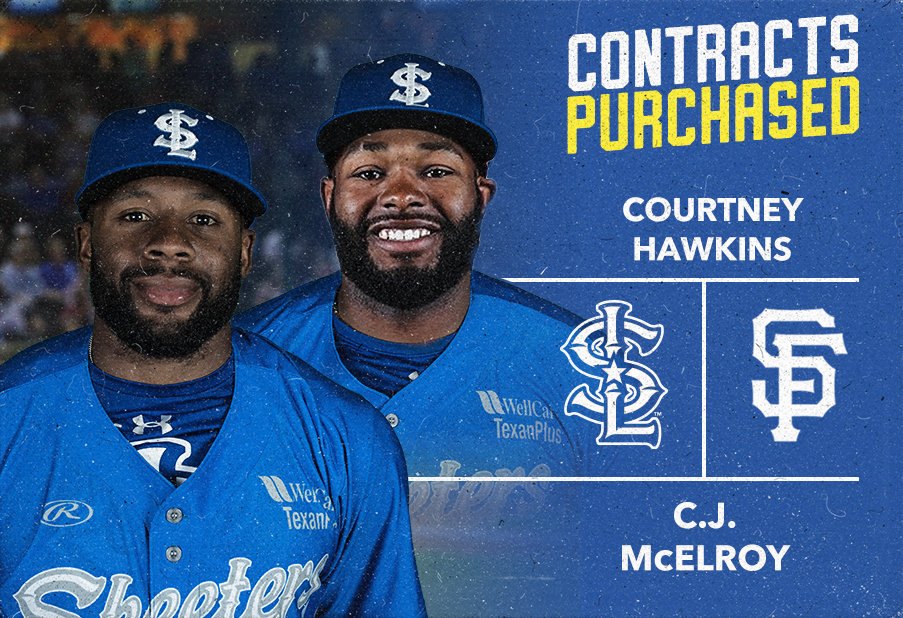 Eight players of the Skeeters 2019 roster have had their contracts purchased by Major League Baseball Organizations, which leads the Atlantic League.

Hawkins, 25, was in his second season with the Skeeters and his ninth at the professional level. In three games with the Skeeters this season, he hit .500/.538/1.083 with two home runs, three RBIs and two stolen bases. He began the 2019 campaign within the Cincinnati Reds Minor League system, appearing with Double-A Chattanooga and Triple-A Louisville and hitting a combined .175 with two home runs and five RBIs in 18 games.

Hawkins appeared in 88 games with the Skeeters in 2018 and hit .285/.342/.505 with 54 runs, 17 doubles, 18 home runs, 72 RBIs and 12 stolen bases. At the time his contract was purchased by the Reds on Aug. 10 of last season, he led the Atlantic League in RBIs, was second in home runs, third in slugging percentage and tied for seventh in runs. Hawkins was selected to the 2018 Atlantic League All-Star Game, along with the 2018 Atlantic League Home Run Derby.  In his first at-bat with the Skeeters, coming on April 27, 2018, at Constellation Field, Hawkins hit an inside-the-park home run, which was the first-ever inside-the-park home run in Constellation Field history and was the second in Skeeters history

The Corpus Christi, Texas was selected by the Chicago White Sox with the 13th overall pick of the 2012 MLB Draft out of Mary Carroll High School (Corpus Christi, Texas). Hawkins was the highest-drafted player to ever appear with the Skeeters, prior to infielder James Loney signing with the team in 2019.  Prior to the 2013 season, Hawkins was ranked as the No. 55 prospect in baseball, per Baseball America. In his senior season at Mary Carroll High School, Hawkins was named the Texas Gatorade High School Player of the Year and bypassed a commitment to the University of Texas prior to signing with the White Sox.

McElroy, 25, was in his first season with the Skeeters and his eighth at professional level. In 17 games with the Skeeters this season, McElroy hit .365/.406/.444 with seven RBIs and five stolen bases. At the time his contract was purchased, he was fourth in the Atlantic League in average, third in on-base percentage and tied for seventh in stolen bases.

McElroy was selected as Midwest League Mid-Season All-Star in 2014 with Single-A Peoria. He is the son of former Major League left-hander Chuck McElroy, who pitched in Major Leagues from 1989-2001, appearing with the Phillies, Cubs, Reds, Angels, White Sox, Rockies, Mets, Orioles and Padres.

McGowan, 27, was in his first season with the Skeeters and his seventh at the professional level. Through five starts with the Skeeters this year, McGowan was 2-2 with a 2.29 ERA. Over his last four starts, he was 2-1 with a 1.08 ERA. McGowan spent the 2018 campaign with Triple-A Las Vegas and Double-A Binghamton (New York Mets), going a combined 6-5 with a 4.68 ERA in 33 games, including seven starts. McGowan made his Major League debut in 2017 with the New York Mets, recording a 5.19 ERA in eight relief appearances, spanning 8 ⅔ innings pitched.

The Mets selected McGowan in the 13th round of the 2013 MLB Draft out of Franklin Pierce University (Rindge, N.H.). He’s spent all six seasons of his professional career at the affiliated within the Mets Minor League system, going 30-31 with a 4.04 ERA in 183 games (57 starts). McGowan was selected as a South Atlantic League Mid-Season All-Star in 2014 with High-A Savannah. He’s the nephew of former Boston College standout and former San Francisco Giants and Boston Red Sox Minor League infielder, Sean McGowan.