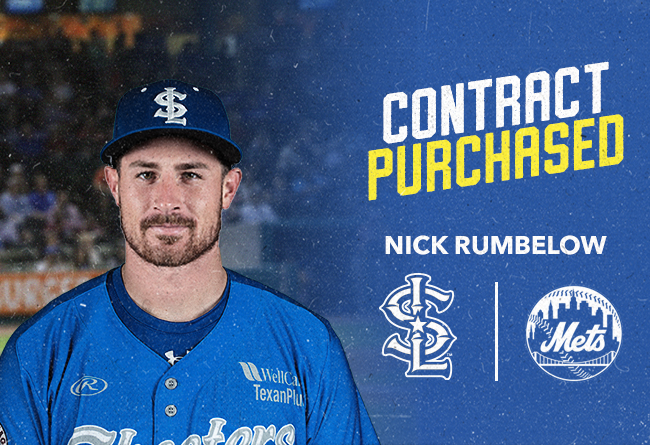 SUGAR LAND, TX – The Skeeters today announced that the contract of right-hander Nick Rumbelow has been purchased by the New York Mets.

Right-handers Michael Mariot (Tijuana) and Matt Ramsey (Tijuana), and infielder O'Koyea Dickson (Durango), have had their contracts purchased by the Mexican League.

The Skeeters have had 25 contracts purchased by MLB teams over the last two seasons, which are the most of any independent league baseball team.

Rumbelow, 27, has gone 3-0 with a 0.81 ERA and seven saves in 22 appearances with the Skeeters, striking out 31 batters in 22 ⅓ innings pitched. Rumbelow was tied for ninth in the Atlantic League with seven saves and held opponents to a .203 average.

A native of Bullard, Texas, Rumbelow made his MLB debut on June 23, 2015, against the Philadelphia Phillies and picked up his first Major League strikeout against Cameron Rupp. The New York Yankees selected Rumbelow in the seventh round of the 2013 MLB Draft out of Louisiana State University.

The Skeeters have clinched a 2019 postseason berth and have chosen “Come and Take It” as their postseason theme, in honor of the Battle of Gonzales. Playoff tickets go on sale on Aug. 2 and visit sugarlandskeeters.com/playoffs for more information on playoff dates and ticket packages

The Skeeters, winners of the 2018 Atlantic League Championship, enter their eighth season of play in the Atlantic League of Professional Baseball at Constellation Field. Individual tickets, season tickets and mini-plans for the 2019 season are currently available and can be purchased by visiting sugarlandskeeters.com, the TDECU Ticket Office at Constellation Field, or by calling the Skeeters at 281-240-4487.

All Skeeters home games can be streamed live on the Skeeters Youtube page or can be listened to live by visiting sugarlandskeeters.co