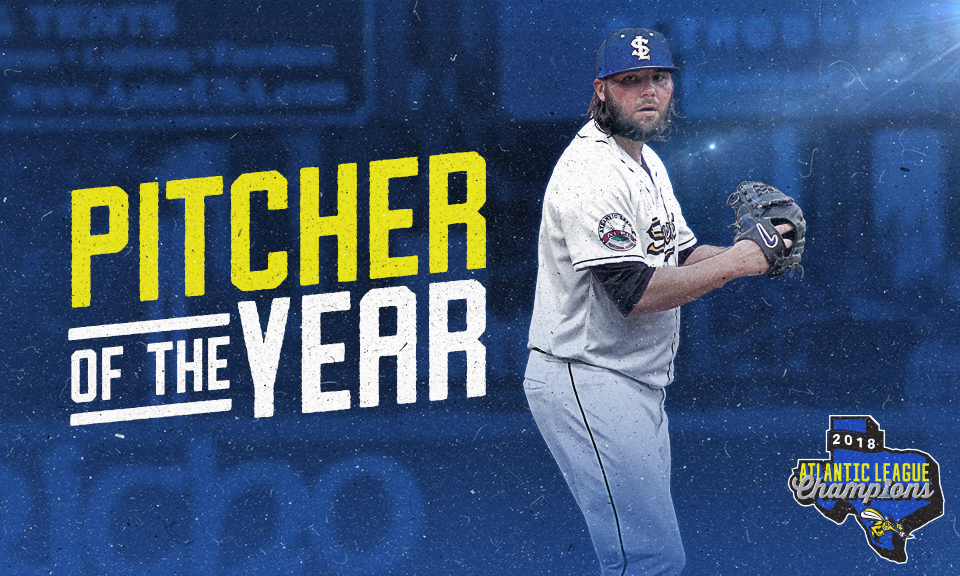 SUGAR LAND, TX— The Sugar Land Skeeters today announced that left-hander James Russell was named the club’s 2018 Pitcher of the Year.
Russell went 8-4 with a 2.36 ERA over 20 regular-season appearances (18 starts), capturing the Atlantic League’s ERA title. He’s the first pitcher in Skeeters history to accomplish the feat. His 2.36 ERA was also the lowest qualifying ERA in Skeeters history, surpassing right-hander David Pauley’s mark (2.66 ERA, 2014).
The former Major League carried his superb year into the postseason, going 2-0 with a 1.36 ERA in three starts in the playoffs, all three of which the Skeeters won. Russell capped off the postseason by allowing one run in a complete-game effort in Game 5 of the Atlantic League Championship Series against the Long Island Ducks, helping him garner the Atlantic League Championship Series MVP honors.
The 32-year-old led the Skeeters and was eighth in the Atlantic League with 98 strikeouts on the season. His 17 walks were also the fewest of any pitcher in the league who logged at least 95 innings. Russell was second in the league with a .233 opponent’s batting average, trailing only Lancaster’s Nate Reed (.216), who was voted this season’s Atlantic League Pitcher of the Year.
Russell finished out the 2018 campaign on a high note, going 3-1 with a 1.96 ERA over his final eight regular-season starts. He was especially effective at Constellation Field, going 4-1 with a 2.18 ERA in 12 home appearances.
Russell, the son of former Major League All-Star right-hander Jeff Russell, was appearing in his first season with the Skeeters. He’s a veteran of seven Major League seasons, spending time with the Chicago Cubs (2010-2014, ‘15), Atlanta Braves (2014) and Philadelphia Phillies (2016). He’s 10-18 with a 4.09 ERA in through 394 appearances (334.2 IP) at the Major League level.
The Cubs selected Russell in the 14th round of the 2007 MLB Draft out of the University of Texas. He last appeared at the affiliated level in 2018, playing with Triple-A Toledo (DET) before joining the Skeeters in May.
Visit SugarLandSkeeters.com and follow us on Facebook, Instagram and Twitter (@SL_Skeeters) for all the latest news on the team and the latest on events to be hosted at Constellation Field.
Download the official Sugar Land Skeeters app to keep up with the team all year long with news, score updates, stats and more. The free app is available in both the App Store and Google Play.