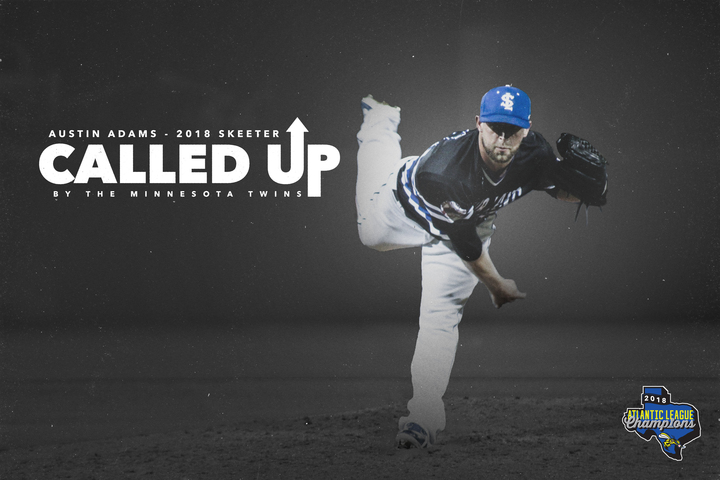 SUGAR LAND, TX - Former Skeeters right-hander Austin Adams on Friday had his contract selected by the Minnesota Twins from Triple-A Rochester, becoming the seventh player in Skeeters history to appear in the Majors after appearing with the Skeeters.

Adams made his return to the Major Leagues on Saturday, throwing two scoreless innings of relief against the Seattle Mariners. The 32-year-old joined the Skeeters in 2018, going 3-0 with a 2.22 ERA and a save in 30 relief appearances. The Minnesota Twins purchased Adams’ contract in August 2018 and assigned him to Double-A Chattanooga. Adams was one of 14 players from the Skeeters 2018 roster to have his contract purchased by an outside professional baseball organization, which was a franchise record.

Adams made his Major League debut with the Cleveland Indians in 2014 and appeared with the Indians from 2014-16. Including his appearance with the Twins this year, Adams has gone 2-0 with a 6.08 ERA in 54 Major League outings (60.2 IP). The Indians selected Adams in the fifth round of the 2009 MLB Draft out of Faulkner State College (Montgomery, AL).