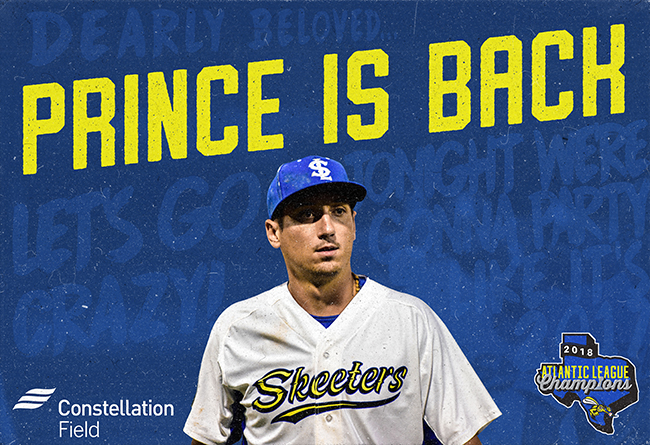 Along with his playing duties, Prince, who’s set to appear in his 11th professional season, will serve as the team’s hitting coach.

Prince, 30, returns to the Skeeters after appearing with the team during its run to the 2016 Atlantic League Championship and in 2017 as well. He spent the 2018 campaign at the Double-A and Triple-A levels in the Arizona Diamondbacks system, hitting a combined .282/.385/.407 with six home runs, 37 RBIs and 12 stolen bases in 104 games.

“First, I want to thank Pete, the Zlotnik’s, and all the Skeeters staff for giving me this opportunity to further my career,” Prince said.  “I have always known I wanted to coach and this is an amazing place to start that journey. These fans are as good as it gets, always supporting our team. I can’t wait to play in front of them again and return to Texas!”

The Milwaukee Brewers selected Prince in the third round of 2009 MLB Draft out of Tulane University, where he tied for the NCAA Division I lead with 48 stolen bases as a junior in 2009. He also spent a collegiate season at the University of Texas.

Prince made his Major League debut with the Brewers in 2013, appearing in eight games and going 1-for-8 with a double and three runs scored. He owns a career .254 average and .705 OPS to go 38 home runs, 250 RBIs and 341 stolen bases through 1,072 games at the professional level. He’s made 335 of his professional appearances at shortstop, 269 at second base and 235 at center field, while also appearing at third base, left field and right field.

Prince joins as IF/C Albert Cordero, IF Alvaro Rondon and OF Tony Thomas as the Skeeters’ first four player signings for the 2019 season.

The Skeeters open the 2019 season on April 25 at Constellation Field against the Southern Maryland Blue Crabs. Season tickets for the 2019 season are currently available and individual tickets will soon be made available. To purchase season tickets, or for more information on ticketing, visit sugarlandskeeters.com or call the TDECU Ticket Office at 281-240-4487.