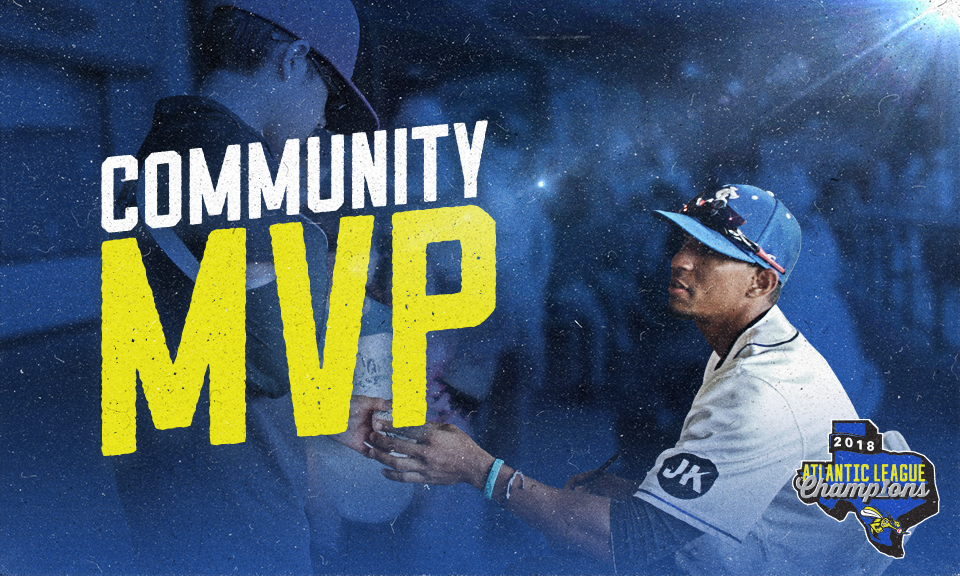 SUGAR LAND, TX— The Sugar Land Skeeters today announced that infielder Alvaro Rondon was named the club’s 2018 Community Man of the Year.
In his first season with the Skeeters, Rondon made himself a staple in the Sugar Land and Fort Bend County communities.
As part of the Skeeters’ community service initiatives, Rondon made an appearance at the Texas Children’s Hospital in early September, going from room-to-room visiting patients through the B.I.G. Love Cancer Care Program.
“Alvaro exemplifies the conduct we hope every member of our organization will display toward the community,” said Skeeters President Jay Miller. “His value to the Skeeters and Sugar Land goes far beyond what he does on the field and we immensely appreciate his contributions.”
Rondon also made an appearance at the Fort Bend Children’s Discovery Center in June, spending several hours visiting with the children in attendance, along with signing a plethora of autographs and giving away merchandise.
The Santiago, Dominican Republic native was a regular volunteer for Skeeters Buddies Kids Club events, holding hitting and fielding lessons, giving tours of the Skeeters clubhouse and the rest of the stadium and providing insight on what it takes to be a professional baseball player — on and off the field.
Alongside with his work toward the Skeeters’ community initiatives, Rondon regularly could be seen signing autographs before and after games, while also taking time to interact with the Skeeters’ loyal fan base.
The 28-year-old also served as a mentor for fellow Latin players who joined the Skeeters throughout the 2018 season and assisted as a translator when needed at events and media availabilities.
Rondon appeared in his fifth season as a professional in 2018. Prior to joining the Skeeters, he played two seasons in the Arizona Diamondbacks Minor League system, a season with the Laredo Lemurs of the American Association and a season with the Texas AirHogs of the American Association. He played collegiately at Texas A&M International University.
Visit SugarLandSkeeters.com and follow us on Facebook, Instagram and Twitter (@SL_Skeeters) for all the latest news on the team and the latest on events to be hosted at Constellation Field.
Download the official Sugar Land Skeeters app to keep up with the team all year long with news, score updates, stats and more. The free app is available in both the App Store and Google Play.